Measures to contain COVID-19 are expected to have significant effects on food value chains—but with important differences between commodities. Horticultural products are expected to be especially vulnerable because of their seasonal labor requirements and high perishability. In a recent survey, Seneshaw Tamru, Kalle Hirvonen, and Bart Minten tried to assess immediate effects on the vegetable value chain in Ethiopia. Their findings suggest that urban consumption of fruits and vegetables is declining, that trade is affected by travel bans and reduced competition, and that farmers face lower prices and reduced access to inputs.— Johan Swinnen , series co-editor and IFPRI Director General.

On March 13, the first COVID-19 case was confirmed in Ethiopia. Three days later, the government closed schools, banned all public gatherings and sporting activities, and recommended social distancing. Other measures to contain the spread of the virus soon followed. Travelers from abroad were put into a 14-day mandatory quarantine, bars were closed until further notice, and travel through land borders was prohibited. Several regional governments banned all public transportation and imposed restrictions on other vehicle movement between cities and rural areas.

While these actions are expected to slow the spread of the disease, they are likely to have substantial effects on food value chains , and thus on the livelihoods of farmers and other workers, and on consumption.

To understand these effects, we conducted a qualitative and rapid appraisal of the vegetable value chain. Building on a large value chain survey that IFPRI undertook in February, we conducted phone interviews (March 23-April 2) with key stakeholders along the vegetable value chain from main producing areas in the Central Rift Valley to Addis Ababa: Small-scale farmers, large scale investors, brokers, agro-input dealers, and developmental agents. Given that this assessment was done based on a limited and non-representative number of interviews, caution is warranted for extrapolation of our observations. They should be seen more as hypotheses of impacts on these value chains. (We intend to substantiate these findings with more representative surveys in the near future.)

Effects downstream and midstream in the vegetable value chain

The COVID-19 pandemic is beginning to disrupt food value chains in Ethiopia and elsewhere, impacting the livelihoods of farmers and the diets of rural and urban households. These effects are likely to hit the poorest and most vulnerable farmers and consumers the hardest, but they are not yet well understood. More evidence is needed to guide the government and other organizations in devising responses. While not representative of the whole value chain, our interviews with vegetable production stakeholders have a number of potential policy implications.

First, urban demand for fruits and vegetables—high value, nutritionally rich foods—is declining. It is possible that this is driven by misinformation regarding the risk of contracting COVID-19 from produce. If so, there is a need for widespread and effective information campaigns.

Second, trade is affected by travel bans as well as reduced competition, because traders are less willing to travel to production areas. Making sure that travel bans do not negatively affect food trade is paramount. To reduce the need of travel, enhanced trading through smartphones, virtual purchasing, and e-payments could be considered so that only truck drivers pickup loads would need to travel.

Third, farmers are apparently hit in two ways. Producer prices are lower, and input prices are up or inputs not available. Farmers will thus have lower incentives to produce these crops, likely leading to lower yields and production in the near future. To avoid further disruptions to food supply, ensuring the availability of agricultural inputs to farmers at low prices, and assuring incentives for production, should be a priority for the government in the next few months. 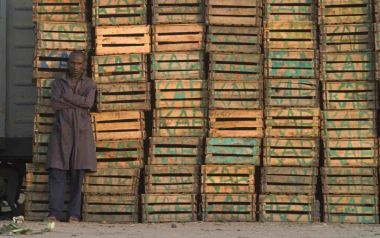 A market porter standing by empty vegetable crates at a wholesale market in Dire Dawa, Ethiopia.